As I was studying this morning, I learned all the new cards for a deck that were scheduled for the day, but before I finished studying, I went back to the decks screen, and I happened to notice that I had another new card due. I thought it was odd, so I tried to pay closer attention when I moved on to another deck.

So I completed that second deck (according to the max review limit set) and got to the congratulations screen. When I went back to the decks screen, it too showed I had one more new card to learn, and when I reentered that deck, sure enough, it showed me another new card.

The issue seems familiar to one we discussed in the thread below. Perhaps it is a regression.

I just updated to V3 scheduler on all my devices. The new handling of daily limits is great, but it seems to not work perfectly—or is it by design? Here is what I am seeing. When I reach the daily limit on a deck (indicated by the screen that tells me I have finished for now even though there are more cards and that I should consider increasing my daily limit, etc.), I then exit that deck to go back to the Decks screen. On the decks screen, it shows I still have more review cards due for the dec…

Sounds like it might be some interaction between the new card and review limits. Do you see the same behaviour when burying of reviews is disabled?

I will watch for this to happen again. I think it may depend on the circumstances of how many review cards I have up for the day and whether I have any new cards.

I have done another test.

I turned off automatically burying for both new and review cards, as I mentioned before.

Then I lowered my daily maximum until it was low enough to limit my new cards presented today. My new cards per day is set to 2, so in this test only one was queued for the day.

I studied through the deck until I reached the congratulations screen. The one new card had been presented during the study as planned. I was careful not to explicitly bury a card during this test.

After I went back to the Decks screen, the deck that I had just completed again showed one more new card. At first, when I went back into the deck, it again showed the congratulations screen without showing the additional card, even though the Decks screen showed one more new card was due. When I synced, then I could tap on the deck and it would show me the extra new card to learn.

It seems that burying is not related, since there were no siblings in this deck, I had burying completely turned off, and I did not explicitly bury any card, yet the same issue came up.

Curious - thanks for testing, and the extra details. If this is happening every day, could you let me know which deck I should try it on? I can then grab a copy of your collection and see if I can trigger it locally.

If this is happening every day, could you let me know which deck I should try it on?

Until today, it was happening every day. I think it has to happen 1) when there are new cards to learn, and 2) when there are more cards due than the maximum daily review count, such that it cuts out some but not all of the new cards.

On the past days, for testing purposes I was temporarily reducing my max daily review limit until the point where it withheld one new card (so it presented only one instead of 2, my setting for daily new cards in that deck). Then when I reviewed everything to the congratulations screen, it would then add the remaining new card that was supposed to be withheld because of the limit. Today was one of those days where a spike occurred, such that I had more cards to review to the point where no new cards were introduced.

I am not sure that it only happens on a particular deck, as I have seen it on two of my three. At present, it is only happening on my deck “Where ini the Bible?,” as that is the only deck where I presently still have new cards waiting on me.

By the way, I meant to tell you that I am really happy with the V3 scheduler, particularly with this improved max review feature. It really helps flatten out the spikes. Thank you.

Thanks Garret, I’ll try to reproduce this when I have a chance.

I suspect this was a side-effect of another bug that was resolved in 2.1.49/the latest AnkiMobile beta. Are you able to reproduce it after updating?

Thanks for coming back to this. I have tested with AnkiMobile beta 20081.2 (as of this moment the current on TestFlight), and unfortunately the issue is still present.

I do not know whether this is more helpful for you than text, but I have made a short video of the steps I have done, and I have also not synced my latest progress to AnkiWeb yet, so that the state you see in the video is the state that is in AnkiWeb so you can test if you wish. I will try not to sync for a couple days unless I hear from you first.

The video is available here: 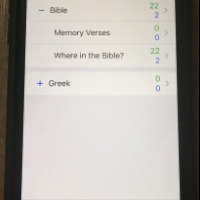 Thank you for the excellent reproduction steps! I’ve grabbed a copy of your collection, and can reproduce this by setting my clock back. Since I have a local copy it’s safe to resume syncing now; I will dig into this further and get back to you.

Please give the latest build a try and let me know if it does not resolve your issue: New toolkit and packaging test (round 2)

Please give the latest build a try

I made a quick test with the mac QT6 Intel build. When I attempt to follow my recipe in the video, it now appears to be resolved.

I don’t think I have ever studied with the desktop app before (though I am well familiar with using it to manage notes, my preferred way to add and manage notes). I assume this scheduling issue would not be dependent on the platform, but it is possible I am doing something differently since I am not familiar with reviewing on desktop. When the next AnkiMobile beta hits, I will test again there, and if there is a problem, I will let you know.

And now I have tested in AnkiMobile beta build 20081.3 - it seems resolved. Thanks.

This issue, or something like it, is back again in AnkiMobile beta 20081.6. When I got to the end of a deck, I reached the congratulations screen, and then the Decks screen said I had one more card left in that deck. I tapped on the deck, and it only showed the congratulation screen. When I synced, then I could tap on the deck and see the remaining card.

I am sorry that I am in a hurry today, so I can’t test in more detail at the moment. I would have waited to say anything until later, but I know that you are getting close to release.

Now that I think about it, I do notice this one difference compared to our earlier discussion: this time it happened with a deck that had only 15 cards for review today, even though the deck limit is 25. So the max daily limit should not be involved this time.

I studied this deck immediately after installing the latest beta over the current release version. Could it be possible that it was actually the release version (which is known to have the bug discussed earlier in this post) that caused the issue this time, even if it manifested right after I first installed the latest beta.

@LesLandau reported a similar issue as well. In his case it was a relearning card that appears to have been buried the previously day (due to a sibling being reviewed). How about in your case?

Hopefully we can get to the bottom of this - the release can be pushed back a little bit if we need more time.

In his case it was a relearning card that appears to have been buried the previously day (due to a sibling being reviewed). How about in your case?

It was a relearning card (if I have remembered correctly which one was the additional card), but I don’t remember burying it, though it is possible. I’m sorry I don’t have precise details.

Do you use sibling burying? If so, if/when it occurs again, please see if any of its siblings were reviewed recently.

I do use sibling bury, but not on the deck where this issue occurred: all of these notes have only one card each.

I am keeping an eye out for the issue in hopes to discern a pattern. Today’s study with the .6 beta had no issue at all.

If it pops up again, please let me know. If I don’t hear from you by Sunday, I’ll assume it was a byproduct of the previous version, and proceed with the stable release.

It is Sunday morning and I have already done my study for the day. I still have not seen this issue come up again. In the last several days, AnkiMobile beta 20081.6 has behaved just as it should for me in every respect.