Bug : Extra characters injected when there is space in MathJax equation

This should be fixed in the .55 release.

Thank you for your response, will flag your solution once I get and verify the .55 release.

Thank you for your suggestion. I am following the issues on Anki specifically while using MathJax. I think there are still a lot of issues to be resolved so will wait a few more weeks. I aggressively use MathJax.

I’ve noticed several problems with the new “Toggle MathJax Rendering” feature. I’m creating this new thread so that all of the issues will be collected in one place instead of being mixed with all of the other comments.

I can confirm that Anki 2.1.55 Beta fixes the spurious addition of non-breaking spaces within equations, but &nbsp; is still inserted after every in-inline MathJax equation 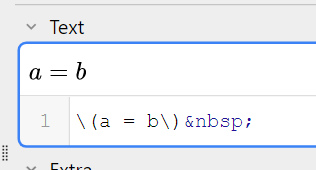 Is this the intended behavior? The nonbreaking spaces appear to have no effect on where line breaks actually occur after equations. 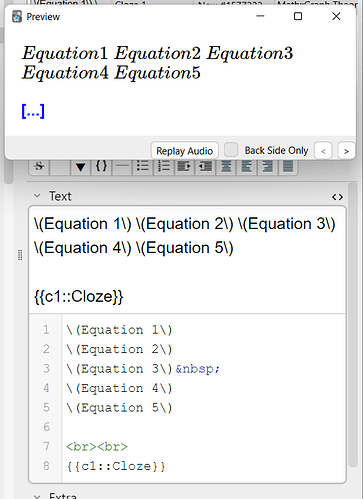 Furthermore, if &nbsp; ends up inside a MathJax equation (as often happens in my notes), then the MathJax preview fails to render. 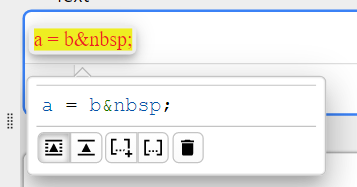 When selecting text which is surrounded by a space or spaces on one or more sides, the spaces are converted to non-breaking spaces ( ), and this causes the MathJax to be displayed with extra space around it. Considering that MathJax can’t wrap round, it is extremely likely, especially on mobile devices, that the non-breaking space just wastes space on the screen.

I believe this may be something to do with how Anki checks when there are two spaces in a row, and if so converts one to a non-breaking space. This may be being triggered when converting selected text to MathJax (this happens when using either the button or the keyboard shortcuts).

I believe that this behaviour should be removed, as it has a negative effect on formatting, or alternatively an option to remove this behaviour in menu as I regularly have to “Find and Replace” the non-breaking spaces to regular spaces.

As far as I’m aware, this is being done by the web toolkit rather than Anki’s code.