I’m a deep fan of Anki. I have been using Anki to study new knowledge points for many years. Actually, I made nearly 20000 cards myself now. But I think Anki has a huge flaw. These cards are isolated from each other. Users cannot make a reasonable knowledge structure by these isolated cards.

Suggestion:
Can we add a feature that allows these already created cards to be displayed in a mind map mode? And allow us to edit the structure of this mind map artificially so that certain relationships are created from card to card.
Now we can’t even reference another card from a card, which I have to say is a tragedy.

the structure of this mind map artificially so that certain relationships are created from card to card.
Now we can’t even reference ano

Just want to bump this up. I also think this is a huge missing feature in Anki. I don’t always use Anki to only test knowledge I use it to organize knowledge.

I do this by lots of nesting in decks (which Anki doesn’t like). If I transfer the deck to somewhere else I have to export it in pieces.

Having a mindmap for anki based on nested decks would really bring Anki to life. Then being able to go into decks from the mind map would be great.

Have you tried using the pop-up dictionary add-on? I think it fills this niche quite nicely.

I used to keep a second Add-window open on another monitor (Opening the same window multiple time - AnkiWeb) and set up Searching, PDF Reading & Note-Taking in Add Dialog - AnkiWeb to only show search results.

While you’re typing, this will show you related notes with thumbnails and you can open a separate edit-window by clicking them.

Last time I checked, it was incompatible with Collapsible Fields though… just checked, works again

While I think manual note linking - which many people suggest - would over-complicate things, a cross-platform (JS-API) way to automatically show related notes (Tags, Keywords) on review could be good way to form stronger associations.

This feature would be amazing. Not only would it let you to organize your knowledge. IT can be used to optimize the algorithm. Not only juding when to show you a card based on the card’s ease factor only but also on the other cards that are linked to it. Like if I have two cards

The mitochondria is the power house of the cell

Mitochondrial dna is inherited by the mother

certain relationships are created from card to card.
Now we can’t even reference another card from a card, which I have to say is a tragedy.

While I would like this feature too, I don’t think Damien has plans to support this. Have a look here as to the reasons why: Can I link cards together? - Frequently Asked Questions

Currently I use the popup dictionary as suggested above. And for my own cardmaking, I try to add some cards that reflect heirarchies/structures/classifications, in whatever I am studying. These cards definitely violate the Minimum Information principle, but they are somewhat useful in preventing knowledge fragmentation.

…The mitochondria is the power house of the cell

Mitochondrial dna is inherited by the mother

If those two cards are connected in the mindmap…

.
How do you teach Anki that these two cards are connected in the mindmap?

I usually study with Anki + Mind Maps. For example, I create answear-questions flash cards about Clinical Manifestations, diagnosis, treatment of diabetes, then I create a simple mind map about Diabetes connecting these parts. This is time consuming, so I just use this technique for the very high yield topics. In my case, I just rely on flash cards for the low yield topics I’m studying.

I think it is a good suggestion, It should be useful, but maybe it is hard to design this kind of stuff.

Add-on cannot solve this problem, because it cannot use in other platform

Add-on cannot solve this problem, because it cannot use in my android device. This why I post suggestions here.

I just use this technique for the very high yield topics.

I don’t think this feature has to necessarily be about making any radical changes to anki. It’s about visualizing (and organizing) data better. If like me you organize through heavily nesting decks (which makes it difficult to transfer the deck!) then the way data/decks is organized in a list makes it cumbersome to visualize how data relates to each other.

I merely suggest that a mind map is a useful feature to show how decks relate to each other. One could open the decks for the mind map or the the list. For example the list of the decks nested below (1) would appear as a mind map (2). 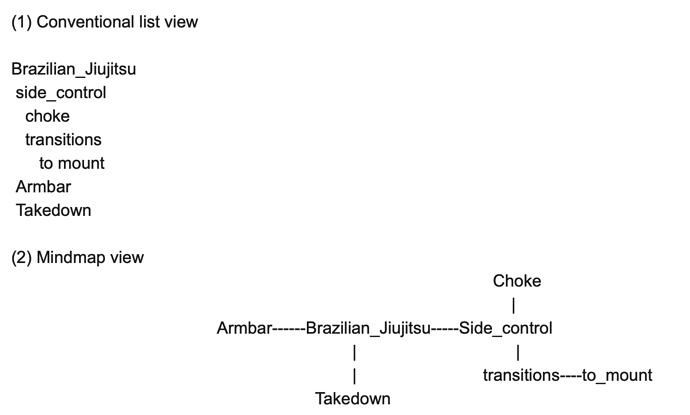 the list of the decks nested below (1) would appear as a mind map (2).

IMHO, your “Mindmap view” does not describe “Conventional list view”.

Maybe the theory of mindmaps has changed since I last used them, but your map makes no sense to me

Sorry. Your indentation fooled me. I saw “Armbar” and “Takedown” at the same vertical indentation level as “Brazilian_Jiu_Jitsu”

In fact, these two nodes are children of “Brazilian_Jiu_Jitsu”.

Yes sorry it doesn’t look great - just did it roughly. But you understand where I’m coming from?

I don’t think this would be too hard to implement. It would just mean

A high-yield topic is one that is highly likely to be featured in exams. (This term seems to be specific to medical school and the like, maybe because of the overwhelmingly large syllabus?)

Can you elaborate? Dragging and dropping of (sub)decks in the browser sidebar to transfer them is pretty convenient imo. Multiple selection of sidebar items was implemented too at one point, but removed because of some issues.

nt imo. Multiple selection of sidebar items was implemented too at one point, but removed because of some issues.

I have a huge deck of cards which I use to organize and study Brazilian Jiujitsu. It has very deep nesting.

If I transfer it by exporting it in the normal manner the deck will not work. Decks do not open, cards do not appear.

I have to spend a day transferring the deck in small parts and then import it bit by bit.

If I transfer it by exporting it in the normal manner the deck will not work. Decks do not open, cards do not appear.

I’m afraid I still don’t understand why you wouldn’t be able to export that deck. Subdecks are exported with the parent deck.

In general, I recommend using a tag hierarchy instead of subdecks for deeply nested structures.

There’s this add-on that converts the subdecks of a selected deck into a tag hierarchy.
(Before trying it, please make sure you know how to restore backups.)

You can batch-edit tags (and therefore the hierarchy) with this wonderful add-on by @Rumo: Find and Replace Tags using Regular Expressions - AnkiWeb

Multiple selection of sidebar items was implemented too at one point, but removed because of some issues.

… which is a shame

Hoping it will come back at some point. But the above mentioned RegEx add-on does the job too, it’s just more complicated for users.

I can export the deck and I can import it but it won’t work after importing it (I can’t open decks to study them). Strangely enough taking it to pieces and reimporting it bit by bit does work.

I have no problem restoring backups. I’ll have a look at the tags and see if it works thanks.