When I try to open Anki, i get a "we're sorry, it looks like "anki" crashed. Please contact developer" type of error message. I

I already tried restarting my laptop but it won’t do anything. One thing I also notice is that this just happened after an update that was 2 days later. I wanted to try to reinstall Anki but I am scared that all my decks would be gone because i don’t recall configuring any type of account or backup when i initially installed it. 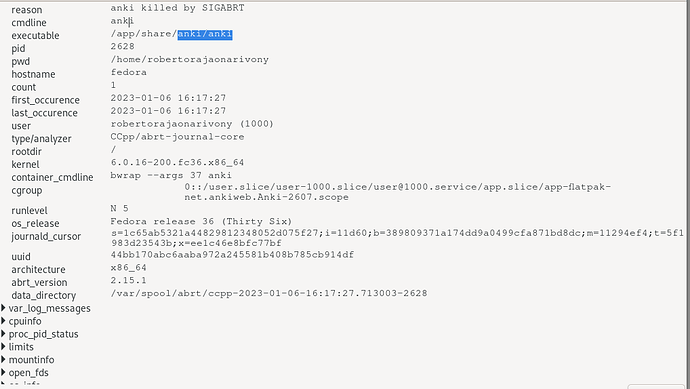 Linux Distro Packages - Anki Manual
There is an flatpak version of the app that is more up to date, but there is one Fedora user with an codec issue
Flathub—An app store and build service for Linux
UnicodeEncodeError: 'latin-1' codec can't encode characters in position 0-2: ordinal not in range(256) · Issue #83 · flathub/net.ankiweb.Anki · GitHub

I am already using the Flatpack version. I thought it was a system problem but i after i updated my Fedora to Fedora 37 the issue is still there. What happens if delete my Anki and reinstall it? Will I lose any data?

nope, cards, decks, and add-ons don’t get deleted when you uninstall the app

got a question tho, I didn’t noticed you installed via flatpak, saw the anki version 2.15.1 and thought it came via Debian package (.deb), did you downloaded via Fedora store? read a comment a while ago that fedora packages were different from flatpack versions from flathub

I downloaded it through the flathub website then it redirects me to the fedora software store, so I assume they are the same. I am kind of nervous deleting Anki and reinstalling it because there are a lot of cards and decks in there. However at this point i think reinstalling is the only solution…

I downloaded it through the flathub website then it redirects me to the fedora software store, so I assume they are the same

Currently the Flathub in Fedora is filtered so maybe that could be why. There is a proposal into removing this filter in Fedora 38 Changes/UnfilteredFlathub - Fedora Project Wiki
Fedora is one of my top 5 distro so I hope this get approved

I am kind of nervous deleting Anki and reinstalling it because there are a lot of cards and decks in there.

Anki don’t delete cards or decks, but what could happen, happened to me before when I tried installing anki though flatpak vs anki via ankiweb, is that anki will create a new folder and read this folder instead of the previous installed anki, then you will have an impression that everything was wiped out, but it isn’t the case, to avoid that