Syncing issue between AnkiDroid and desktop

Hello. I had a strange syncing issue today. I reviewed all my due cards on the desktop version this morning. I only had some learning cards left to go that were supposed to be due this afternoon. I wanted to do them on AnkiDroid just now, so I synced them. But after syncing, the due counts didn’t make any sense. So I tried syncing again on desktop, and now those incorrect due counts are showing up on desktop too.

There were about 40 cards that showed up as Due, even though I had already reviewed them today: 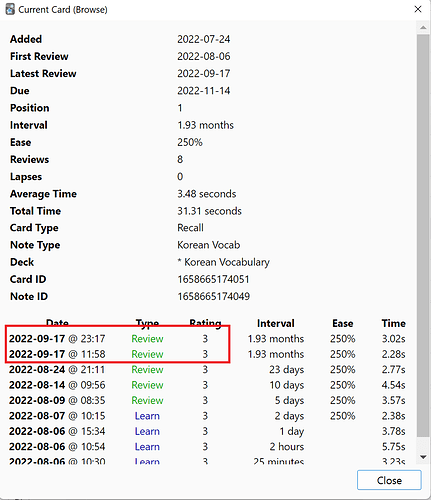 And then about 15 learning cards that are not showing up, even though they should. They do show up when I use custom study to increase the new count, and their interval has gone down as if they were completely new: 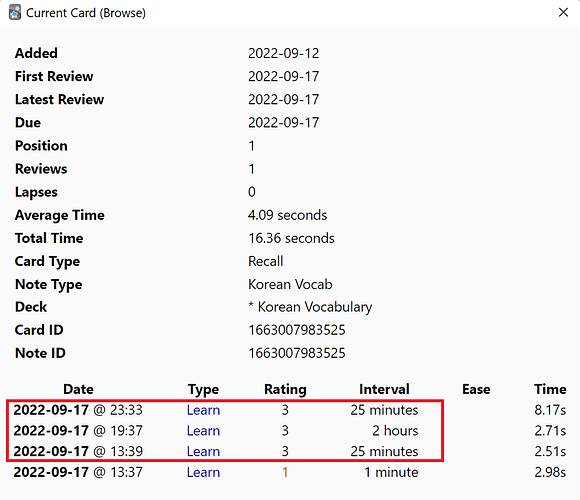 I’m confused as to what could have caused this? It’s not a big deal if I have to review these cards again, but I’d rather not have this happen regularly… I did download the latest alpha version of AnkiDroid a few days ago and I’m assuming this is the culprit. But I haven’t seen anyone else mention this issue so far.

I’m reviewing my cards for today and did another test.

I did my reviews on Desktop, did a sync, checked Ankiweb and the card counts were correct.

So the problem must be on AnkiDroid’s side… I’ll make a topic on their support forums as well.

It may have been caused by:

The change in 2 will overwrite the change in 1, so the cards end up getting shown again. When you review them again, you end up with duplicate log entries.

You can avoid this by always syncing at the start and end of each session: Syncing in Anki: Getting Started - YouTube

Thanks for the advice! I don’t think that was the reason, because I only ever modify the cards on desktop, I didn’t use any filtered decks, and I always sync before and after every session.

I’m going to wait it out a bit to see if the problem returns. If it does, I’ve been advised on the AnkiDroid support forums to turn on the new backend which uses the v3 scheduler, so I’m gonna try that too.