Problem. Anki is going through all cards at once

When I first started using Anki after creating a deck Anki was always going back to the cards that I did not know quickly. Only if I knew them Anki would ask me another card of the deck.
I have not changed any settings knowingly, I only created a few more decks since then.
Now that I wanted to start studying, in all the decks Anki is showing me one card after another without repeating the once that I fail.
I’m pretty desperate, because it was a lot of work creating all the cards, but in this mode the program is useless for me.
The same thing is happening on my laptop and in the app. I reinstalled the software, but it did not help.
I would be very thankful for your help! I’m new to the software and the settings are pretty hard to understand. Also its weird because I did not change them knowingly, so I’m not sure the settings are the problem.

I’m pretty desperate, because it was a lot of work creating all the cards, but in this mode the program is useless for me.

Could you explain how such a thing renders Anki useless for you? because the cards will get shown eventually and nothing major will change (in my eyes).

Hi abdo, Thank you for your quick reply.
The Problem is, that Anki is showing me 50 cards in a row (the whole deck) even though I don’t know any of them and hit repeat. When I first studied a new deck with Anki, if I didn’t know the first card, it showed me the second one and then the first one again. It showed me a few cards total and as long as I didn’t hit good on any of them it didn’t show me more.
I am using the standard settings I believe. I pushed reset to for all of them.
Here are my screenshots (sorry, they are in German): 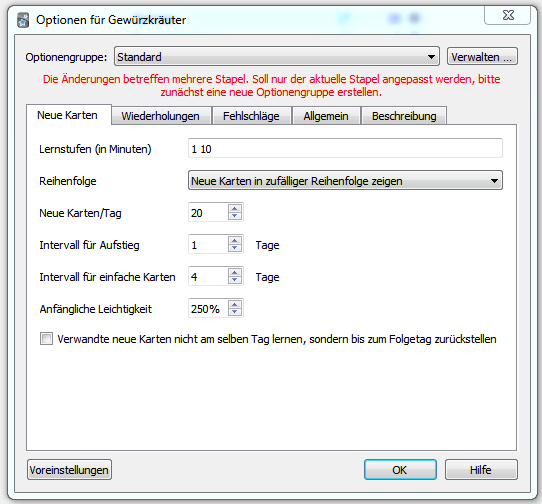 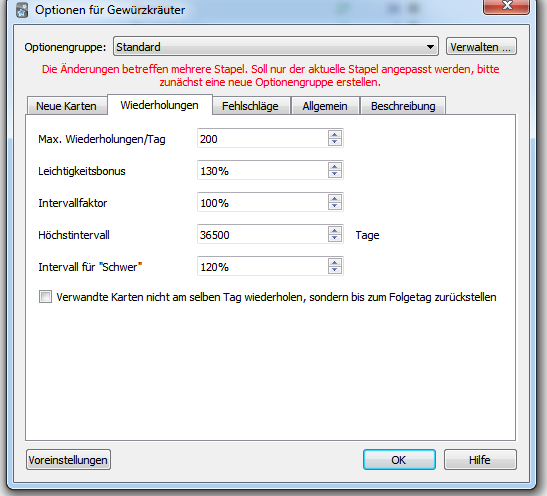 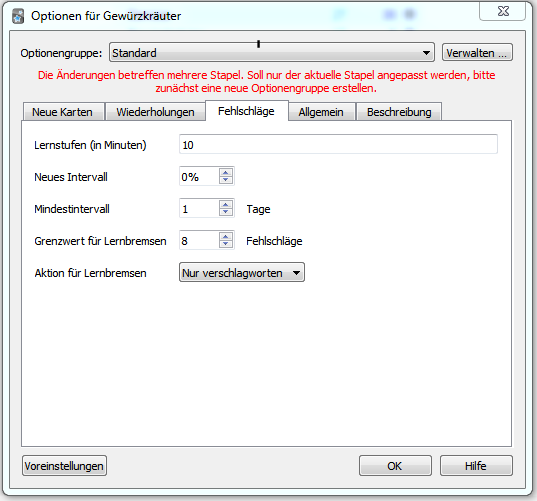 I think it’s normal for Anki not to reshow cards you failed immediately. This depends on the card due state of course. Anki also adds a small amount of randomness to due dates. See What spaced repetition algorithm does Anki use? - Frequently Asked Questions
But if those were learning cards, they should be shown before review and new cards eventually, but a learning card that you just failed could be shown after another learning card that’s due earlier.

Hi Mausekito, I’m having the same problem with all my decks. Did you find any solutions ?

The same problem started appearing in my daughter’s Anki decks yesterday. She’s been using Anki vor vocabulary for years, but with all new cards showing at once without any repetition it’s become useless for her too.
In the past, during studying Anki would show her a limited number of cards (maybe 5) repeatedly until she clicked at least “Good” for one of them, at which point one new card was added, and so on. This has worked very well for her.
But yesterday she added 37 new cards (not an unusual number), started studying, and 20 new cards were shown in succession without any repetition. She had clicked “Again” for all of them, but none were repeated.
The cards were entered with Anki 2.1.49 on MacOS, she studied with Anki 2.15.6 on Android.
Is there any setting to limit the number of new cards shown before repetition? I couldn’t find anything in the settings. Here are the current settings that I don’t think we’ve changed since she started (same for all decks):

Meaning that out of the new cards, only a few used to be shown in the study session at the beginning and then repeated until she mastered them reasonably well, and only then more new cards were introduced gradually. What’s happening now is this:

So no repetition whatsoever. This does not work at all for her (nor would it for me). If we can’t get this fixed Anki has become completely useless for us.

How many cards you can mark again before they start coming back is a function of the first learn step length. If it takes her 1 minute to get through 5 cards, that’s how many will be shown at once. If she’s racing through 20 cards in the space of a minute, she should consider either slowing down a bit to try to commit them to memory, or decreasing the 1 minute first step to something even shorter.

Thanks! I did have the impression that she was going through the cards rather more quickly than usual. I’ll tell her to be slower on the next batch and see what happens.