I need this to avoid thousands of unnecessary repetitions of the material I already know. Manual rescheduling is too much work for me. I hoped there was a feature or add-on to do it automatically, in bulk… 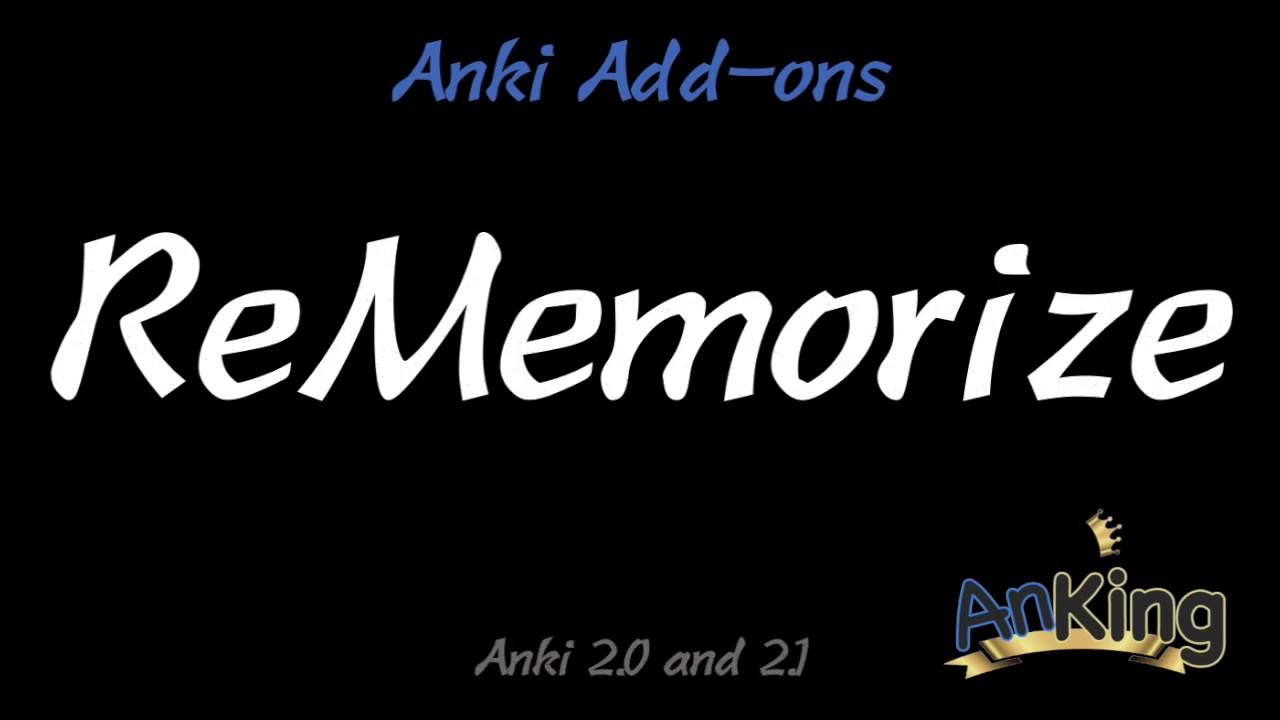 Thank you, but unless it could reschedule in bulk on the basis of values of a custom field, with dates imported from external spreadsheet, I do not see how I can use it…

you could accomplish setting the corresponding due date for each card with precision of date and time by editing the database externally with a single SQL query if you have the due date as a field. It’s not strictly the best apprach, as you will have young or mature cards with zero reviews and you may see weird graphs or stats until you review the cards at least once.

Feel free to DM me with your spreedsheet or collection.anki2 file and I’d do it for you.

Thank you very much. It should work. I have to repeat it for several people who use the same collection. I could send you the files but I am sure I could do it myself. If you gave me links/instructions how to execute SQL queries, what tables and fields to change, etc, it would help to speed up my work. It would be nice if you told me also the format for dates to use in the imported file.

Ok, then I think the best solution is recording a video guide with a sample (dummy) spreadsheet. So privacy issues involved, as queries and stuff will be the same. I will reply here once I am done, let’s say within a week.

Thank you a lot. Could you tell which format to use for imported dates, so I could import the Due dates into a custom field?

It’s epoch time with seconds. If you don’t want a specific time you can use the midnight as reference.

Thank you. I used the formula from this answer to convert the dates from google spreadsheet format into Epoch time: https://stackoverflow.com/a/48879036/3421814

Once I have the dates and intervals imported into custom Anki fields, I can send my collection to you, if it helps to you to prepare the instructions, so I can repeat the procedure for me and for the other users of this collection

Hi,
I imported the scheduling data into the following fields:
importedDueDate - the date of the next repetition in Linux epoch time format;
importedInterval - the current interval of repetitions in days;
importedPosition - the position in the queue of new cards, integer number.

Then I exported my collection into file named collection-2020-08-30@15-42-08.colpkg.
I unchecked the option “include media” when I was doing the export. Should I have checked it?

I believe it is enough to export only one deck, not the whole collection. So I exported only the deck I need to reschedule. Here is the collection.anki2 file of that deck.

Meanwhile I will try to make the changes myself. I would do it much faster if I knew what changes I need to make in terms of tables and fields…

For now I managed to open the collection.anki2 file with sqlite and start sqllite command line.

Thank you very much for the help you already provided.

I recorded the process (38 minutes). I may ask you for permission to share the video publicly, otherwise I will send the video privately.

Thank you very much! You can publish the video for all to see.

Here is the video:

I did it slightly differently than that on the video. Instead of using Excel I decided to go the hard way and wrote an SQL query to do the job. Another difference is that I imported the due dates, which were in the past (overdue dates) as they are. So they stayed overdue for the same amount after the import as they were before the import. Some dates still changed after the import, but not much, the maximum error was ±1 day (see the second screenshot). I assumed it is because of truncating partial days and/or because Anki starts its day at some other time than midnight.

I used the following articles the learn the database structure: https://www.juliensobczak.com/write/2016/12/26/anki-scripting.html
https://github.com/ankidroid/Anki-Android/wiki/Database-Structure

I posted also a relevant answer on a question about SQLite, which I reused to write the SQL query:

Below there is the SQL query I wrote to update the schedule and some screenshots confirming the results of the import.

I would like to credit @guillempalausalva for his very helpful hints and video. The only thing I did was to write the query, but the whole process was described in the video. I am new to Anki and without @guillempalausalva’s help I would have been stuck countless times, without knowing tens of small know hows and trying to figure out how to do a simplest thing. 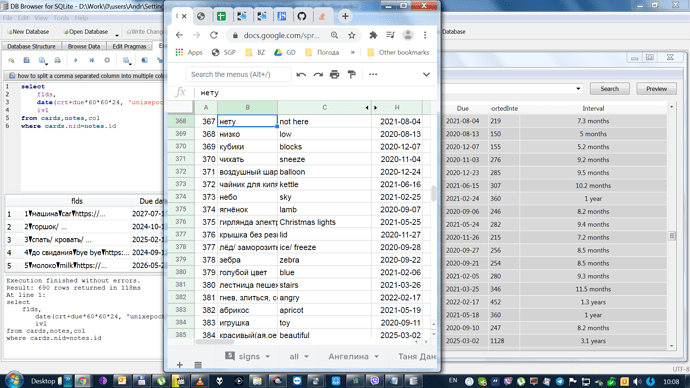 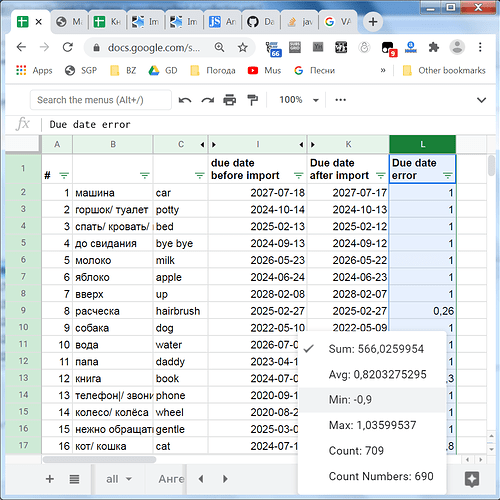 Absolutely brilliant ! Just 1 day off is pretty good, perhaps that is due to leap years. I am not that versed in SQL to end with such a query.

You can paste the solution in the subredit post as well, for future google hits.

Note is time to enjoy Anki

Hi Guillem, Your video appears to have been removed. Is it possible to reinstate it? I sense that you might have attempted the external schedule import using Excel. If so, this may be the more appealing process for those not inclined to learn the SQLite approach.