I’m experiencing problems from Anki’s intervals depending on new days. When I’m learning a card, I have the steps as shown in the image. Ideally, when I’m learning the card and I don’t remember it, it’ll be shown again in 20 minutes and if I do remember, in 4 hours…8hours…1 day…2days etc.
It’s extremely important that I want Anki to show me the card down to the exact interval(i.e. 8 hours = 480 minutes, 1 day = 1440 minutes).
However, Anki fails to follow the interval whenever they cross the ‘new day boundary’ and shows me the card before 480/1440 minutes. For example, when it’s 10pm and I’m studying a new card and click ‘good’, it does not follow 4 hours(240 mins) and instead shows me the card at midnight(the new day) instead of 2am.

Is there any way I can remove/avoid or circumvent this new day boundary?

Thank you for reading this in advance, I hope you understand what i wanted to say… 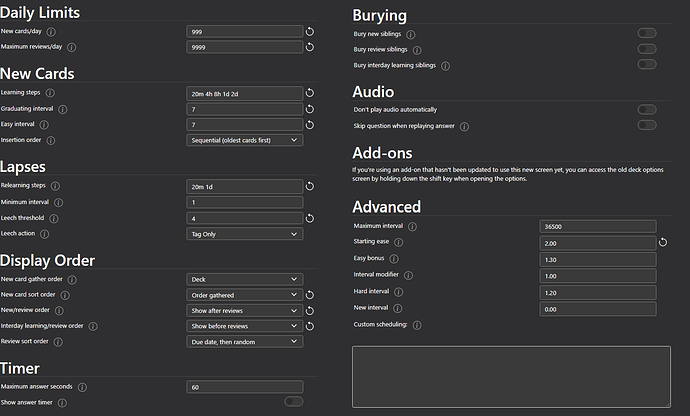 No, there isn’t.
It sounds like you’ve set the day boundary to midnight, but regularly study after that. If you set it to a later time at which you are usually asleep, like 4 am as is the default setting, there shouldn’t be a problem, because when you wake up the interval will have passed anyway.

Is there a deeper discussion on why this day interval even exists in the first place? Why wouldn’t our “daily limits” be set based on a rolling timer rather than a fixed cut-off time? It feels very unnatural to have a giant load of cards to review in the morning, with only a few at night.

The same would go for reviews; you are comparing the daily limits with the number of cards reviewed within the last 24 hours, as opposed to since some arbitrary cut off time for a “day”.

Sleep plays an important role when solidfying memories. Despite the spaced repetition effect, I’m rather able to recall a card I have answered 8 hours ago spending those 8 hours sleeping, than a card I answered 16 awake hours ago.
Also, that’s just how people work. If I meet someone tonight and expect to see them again the next morning, I say ‘see you tomorrow’, even if it won’t even be 12 hours.
Likewise with my Anki reviews: Reviewing daily is a much more practical goal than reviewing once every 24 hours. Maybe I usually review in the evening, but tomorrow I’ll only have time in the morning. If Anki scheduled a card today to be due in 24 hours, it would be 48 hours until I could review it (or two sleep cycles).

Hmm, I’m not really convinced. Maybe what you are studying works well enough like that, but if I review a card at 11:59PM and Anki reschedules it for the next day, and this arbitrary cut off time occurs at midnight, then it will be rescheduled for a minute later rather than 24 hours later. This alone just doesn’t make sense to me. More than anything though, I get really overwhelmed by seeing the giant stack of cards in the morning rather than having a gradual growth over time. I can manage a few cards an hour, but can’t manage 150 in the morning before work.

The only thing I can think is that having every card split between the “learning” phase and the “long term memory” phase is just a way to save disk space (i.e. saving shorter numbers representing day interval as opposed to longer numbers representing minute intervals). With current computational power and disk space of phones/PCs, I no longer think this should be an issue.

To reiterate, it doesn’t matter if the technically scheduled interval is 1 minute, if you’re asleep at the time. This typically means an interval of at least 6 to 8 hours.
If you feel overwhelmed by the daily due count, there are techniques to deal with that, e.g. timeboxing.
Disk space is not a consideration. I’ve explained above why due dates are day-based.

The default day cutoff is 4am. If you’re awake at that time, you should adjust the cutoff to a time that occurs when you’re usually sleeping.