I’d be happy to chat about this with you if you need. I’d recommend making an option to toggle transparency of the image and whether it shows up in the reviewer or not.

Will this affect the ReColor addon?

I noticed that the top and bottom bars share the same trigger, i.e., if you hover over the top bar the bottom one will also show (if hidden), and vice versa.
Maybe it would be best to make them act independently?

As of now, you cannot move the mouse over the bottom bar (e.g. to click on the More button, or to flip/rate cards) without the top bar flashing. This also means that users who wish to always keep their mouse e.g. on the answer buttons effectively cannot hide the top bar. And so on.

(Minor) The bars are also triggered: 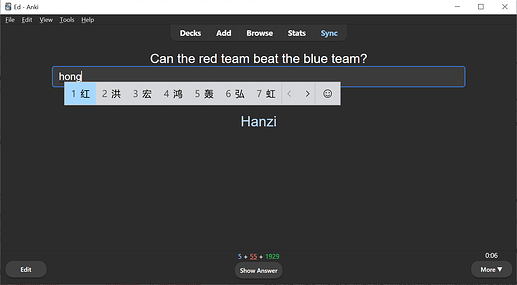 A minor graphical issue (was also in 2.1.56, running Ubuntu 22.04): In the browser, the column headings are not aligned in the center of the column, but a tad to the left of center. This is especially visible when the columns are narrow. Have a look at the “Reviews” and “Lapses” columns here.

[Album] Imgur: The magic of the Internet 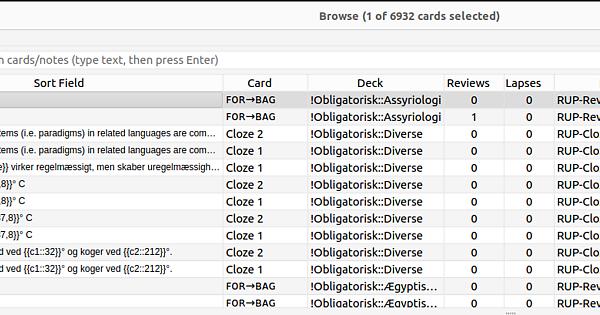 I’d recommend making an option to toggle transparency of the image and whether it shows up in the reviewer or not.

The plan is to support any type of CSS background. Instead of the body itself, the CSS is applied to a pseudo-element of the body with z-index: -1 and pointer-events: none. The computed style of that element is then stored in the user profile.

The setting will feature two sliders for the most useful tweaks (opacity and blur) and a text input for plain CSS. There’s a two-way binding between the text area and sliders, meaning changes to one element update the others and vice-versa.

In the text area, you’ll be able to set arbitrary CSS for the background element, e.g.:

For example, you could use a CSS filter to achieve all the things you can do with the following tool: CSS Filters Generator - Modify images with CSS/SVG only - JustCode.today

Will this affect the ReColor addon?

This add-on changes the values of our color palette, right? If that’s the only thing, there should be no issue.

Sounds great. Probably worth reviewing the Custom Background and Gear Icon addon as well as Dancing Baloney as that’s what most people are using. And ideally make it user friendly for those that don’t know css at least to apply a simple background, change opacity, and choose whether it displays in the reviewer or not. Can’t think of any other super important things that are needed

That’s always a high priority for me

Here’s the WIP. The CSS editor will collapse to the right (a badge on the side will serve as expansion trigger). Clicking the image opens a file dialog showing images in collection.media. I will probably add a clickable icon in a corner of the preview to better indicate that behaviour. Depending on the theme you’re currently in, the chosen file will be used as light or dark background respectively.

I decided to put the sliders inside the preview so they serve a second function as sample text. If it’s readable here, your cards will probably also be readable with that background.

What are your thoughts on having (or having the ability to have) coloured feedback buttons like AnkiMobile?

Yeah, I’ve been thinking about this. Certainly there will be a set of users who prefer the non-colored version, so it would need to be optional. It’s one of those things that are now easier to justify with the addition of the Appearance tab in the preferences.

Windows10 qt6, Anki not in minimalist mode:
if I go to the deck browser (main window), click on a deck and drag it, the window often starts flashing.
This happens mostly with complex deck trees, when keeping the mouse in the deck name/box area (so that, as I move the mouse up/down, the “highlight row” feature is activated)

Edit: it also sometimes happens when simply moving the mouse up and down over the deck names and when scrolling the window.

Do you mean like after you hit again/hard/good/easy it flashes a little symbol? If so, this is mandatory for my Anki experience on both desktop and mobile. Without it, I always doubt if I pressed the right key.

I’m currently using The KING of Button Add-ons to accomplish this. I feel that this add-on is a bit overkill for what I need.

I don’t love the way it looks at all. I feel wherever the “flash” is shown, it should be in the same spot every time – possibly in a corner of the card window. @kleinerpirat mentioned an appearance tab which would help a lot. Being able to adjust color/style and position would be amazing.

EDIT: For anyone looking for a simpler solution, @jcznk recommended me Color Confirmation and I placed it in the top center.

Without it, I always doubt if I pressed the right key.

You should put a little more trust into your fingers ;D

But yeah, we could add some form of confirmation for the rating of cards. I was thinking more in the direction of a subtle row of 4 points somewhere in the top toolbar (probably left side) that fades in and out after a rating. The point correlating with the pressed button would get a little visual effect, e.g. like a raindrop on water.

This would not grab too much of your attention and should be sufficient to check if you pressed the right button. 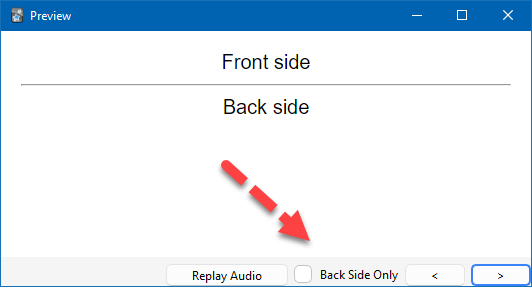 This has been a “problem” with Anki since forever.
I guess nobody thought it was an issue even since the Anki 2.0 days.

Is it possible to integrate the addon Audiovisual Feedback into ankimobile? I think that style of feedback would look amazing compared to other styles or what is currently available.

This is fixed in a pending PR: Reduce Qt margins, tweak scrollbar and splitters by kleinerpirat · Pull Request #2260 · ankitects/anki · GitHub

Seems like the behavior of {{type::}} fields on the back site has changed when nothing was entered:

There’s now a duplicate of the <span class="typeMissed"> element (so, incl. the field content) as first child of the <code id="typeans"> one. Previously, that child did not exist (the first one was the <br> that’s now the second).

(edit: This case behaves differently on AnkiDroid, btw: It skips the two <br>s & the arrow element, only emitting the content in that typeMissed span. Less clutter.)

fyi, the ReColor addon breaks things with this beta

Thanks for the heads up. If you have time to share the error on Github I’d appreciate it. I probably will be recommending people stay on 2.1.56Qt6 for the time being unless the upgrade to 57 is minimal

It would be great to be able to turn off detection as I change the expansion/collapse of a deck.

I think it’s a bit annoying that when you expand a deck, it’s recognized as a required sync change.

Please let us know how you go - if no issues crop up, the plan is to release this as stable in a few days.