I have around 16 decks, half of which have several subdecks, and I’ve ended up with 12 different option groups spread across these. It can be a bit cumbersome to edit each deck’s options individually.

It would make life easier if there were a dialogue where I could see a list of all the decks that have a particular option group, and perhaps you could select the decks in this list and change their option group? (A bit like how you can change the deck of a card from the browser.)

I’ve ended up with 12 different option groups spread across these.

That seems a bit much. Do you really need that many? As a first measure, you could try to reduce that number to simplify things (I got 3 for 45 decks).

It can be a bit cumbersome to edit each deck’s options individually.

You can automatically apply deck options to all subdecks. Perhaps you could try to reorganize your deck hierarchy such that decks that need the same options are under the same parent deck.

Thanks for the reply. Mostly I’m using the different option groups as a way of controlling how much time I’m spending on Anki each day. So depending on whether I want to slowly ramp things up or down in particular decks, I’ve got a “1 new card”, “2 new cards”, “5 new cards” option group, and so on. I then have some of those groups again but with a longer interval modifier for certain decks.

So it’s not so much that it takes a long time to change all the settings as once. It’s more that to keep track of my fine tuning I’ve got to visit the individual options page for each deck.

Also, how can you apply deck options to subdecks automatically? I don’t see that option in my Anki (2.1.44) though I have seen it on some of the .45 alpha screenshots.

Anyway thanks again for the reply. This was more just a suggestion of something I thought of rather than a huge complaint.

I fully see what you mean and yes, 45a has a feature to save the deck options to all children decks, which works great.

I think you’re making good observations here, I would try to elaborate more specifically your idea and explain more in detail why you think it would be useful to many users, this way the probability that someone else decide to implement it will be higher.

Also, how can you apply deck options to subdecks automatically? I don’t see that option in my Anki (2.1.44) though I have seen it on some of the .45 alpha screenshots. 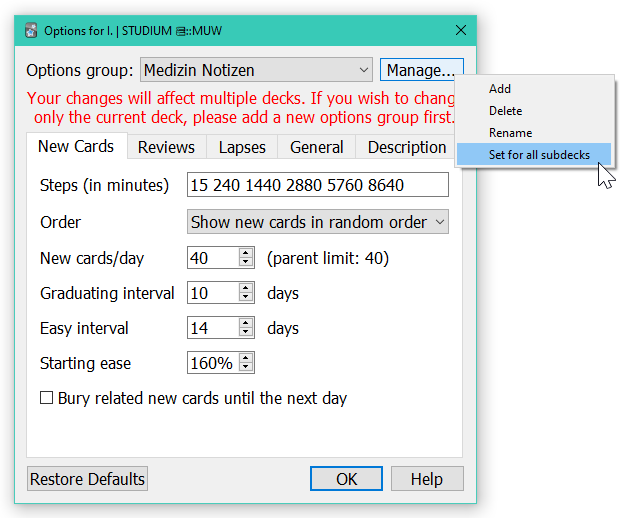