Issues with swiping gestures on iPadOS

On iPadOS the “swiping” gestures only work on the very outer sides of the screen.
I am not sure if the “borders” are based on a fixed amount of pixels, but at the very least on an iPad Pro, “swipe left / swipe right” are very janky and inconvinient. swipe up / swipe down are still unintuitive, though at least “useable”.

Esspecially on slide over the sides of the apps are used to move the slide over window, so making the swiping gestures becomes a terribly precise task.

On android you can swipe anywhere on the screen. I would LOVE to do the same on iOS/iPadOS. It’s very inconvinient right now.

Video: just showing it a bit on camera. though it’s hard to show with 1-hand while recording. Anki Forum example video - YouTube

Screenshot 1: The blue color is the area that the OS uses to move the App around the screen. The red color marks the “area you need to start swiping from”. 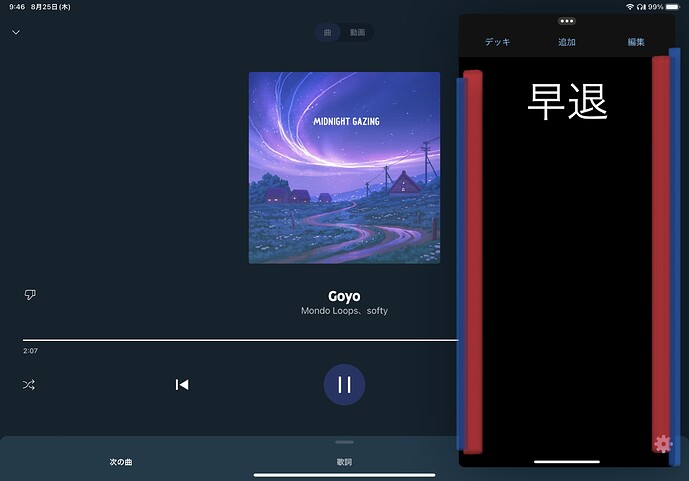 Screenshot 2 (split-view): Red marks the point you need to swipe within. Swiping outside of the red line will make it so the swiping gestures don’t work. 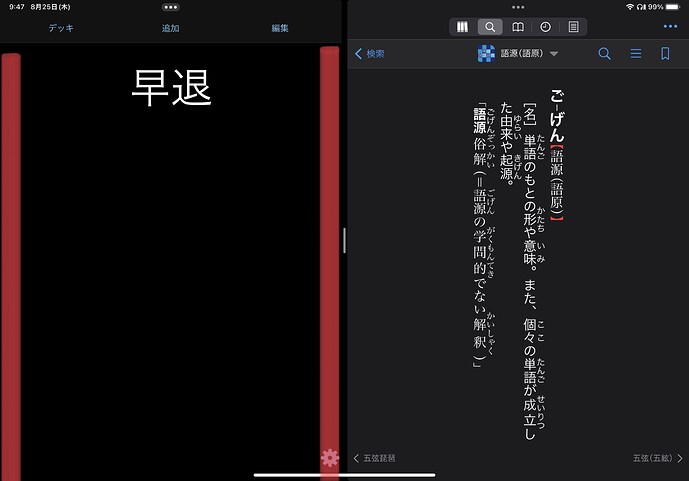 Screenshot 3: I never use Anki in fullscreen. but just for reference. once again Red = only way to use swiping gestures. 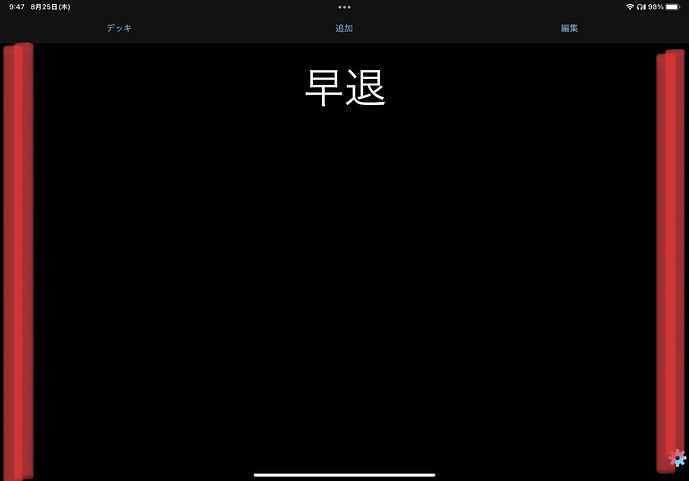 It ultimately boils down to:
Please swipe left/right within a 7-8mm tiny area on your display.
I assume most people don’t use the feature at all, since it effecively doesn’t work in the first place. hence, no reports.

Please change / add an option to make it the same as on android.

The zones are narrow to avoid conflicts with scrolling: Swipes left/right are registered only half of the time - #4 by dae. I can see how that may be inconvenient on iPadOS with the multitasking feature, and will look into adding an option to increase the zone size. Please note this will mean you will not be able to scroll within that area.

I feel like the only reason why “Taps are easier”, is because swipes are randomly restricted to a 5% area of the screen, even though they work normal on Android.

swiping gestures are just infinitely easier to use, esspecially 1-handed and on big phones (or tablets) since you can execute all necessary functions from anywhere on the screen.

I use those gestures on both Android and iPadOS (soon also iOS). They work beautifully on Android, but are somewhat frustrating on iOS, due to the restricted area swipes can be used in.

If i may ask, where the issue is to make it the same as on Android?

On Android the solution to this is:

look at how smooth it is!

And as a little feedback:
Generally flashcards in an SRS shouldn’t have so much information-bloat, that scrolling is necessary anyways. So 95-99% of cases, scrolling won’t be present. And if it is present, it won’t be an issue the way android handles it.
And since swipes aren’t set up by default, noone should get confused over it randomly. (and it would also be consistant across different versions of the App with android&iOS.

That does seem like a reasonable solution; I will look into it.

I agree, but not everyone follows that rule

Just as another small side-note to why that is good even further:

Since all cards start in “the top left corner” of a card, even if they contain scrolling, that still means that swiping right (e.g undo) and swiping down (e.g wrong answer) can be performed instantly.

You would only have to “first scroll to the end” for rarer actions (comparably in review session) like “edit card” and “repeat audio (e.g swipe up)”

is there a chance you already made some changes and ninja-dropped them live / onto the beta…?

I am experiencing fairly weird behaviour with the swiping and scrolling currently.
Though I did recently switch to iPadOS16.1 (public beta), so there is the chance it’s just that.

I haven’t had a chance to look into this yet, so it’s possible the issue you’re encountering is something introduced in iOS 16.