I noticed a couple weeks ago that the stats screen is getting an overhaul. Here is the old (left) compared with the new (right): 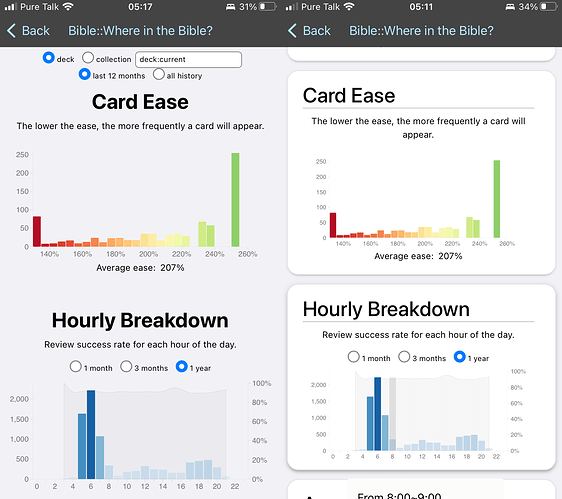 I generally feel very good about the new direction for the stats. Breaking them up like little widgets looks nice, and readability is increased more than I would expect by having the charts on a white background instead the light gray.

On the not-as-nice side, there is less available space for the graphs which have been scaled down. Now the gray axis labels are really small, and the bars themselves are even smaller tap targets than they were before, so it is hard to tap the correct columns. It is hard to get an idea of scale from my screenshots above, so I made a scale reference. The text on the axis labels are a tad smaller than 4pt Helvetica. 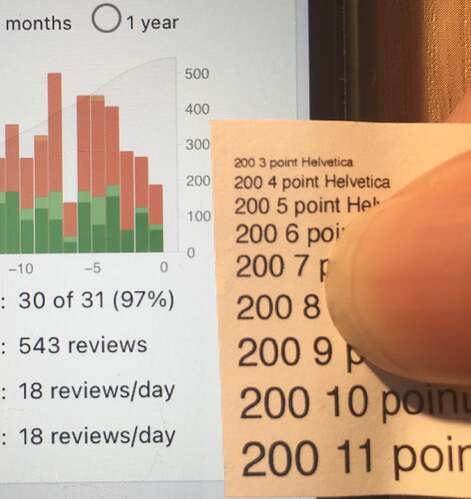 My “vote” is to keep the new design—not that I have a vote. But I would like to ask if it is possible to scale up the charts or work on some other way of improving their size on small screens. It appears there would be room to scale them up with less padding even in the current design. Probably you would have proportional padding so that you could have a good look on larger sizes. Also, it does appear that the widgets have a few more pixels of padding on the right than on the left, if the heading underline/border-bottom is an accurate indicator.

As I have mentioned elsewhere, this is viewing on an iPhone SE (current size).

While on the subject of feedback of stats, would it be possible to disable select on the stats screen? I think this is in old versions too, but when you touch a column to see the details, it also tries to select the axis labels beneath it, and it kind of works in cross purposes in that context. It doesn’t seem like the stats screen can be copied in a helpful way anyway.

@kleinerpirat would it be easy to extend the graphs to the edges, ignoring the margin that we have for the text? Currently the border around them is the main thing squishing them down, and there’s already some built-in padding in the graphs to accomodate large tick numbers. 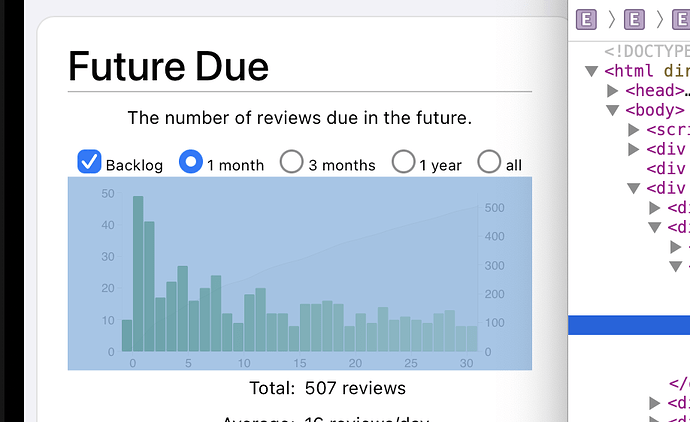