I went to change the type of a note the other day. I have been using Anki for a little while, but I was so confused by the new UI for this (introduced in 2.1.45 I believe), I had to take a look at the old UI again. In fact I considered keeping 2.1.44 around for the sole purpose of changing note types, but my profile is no longer compatible with the older version (I assume because I am using the v3 Scheduler).

Here are a pair of screenshots of Change Note Type UI, old and new interface, using the same two note types of mine: 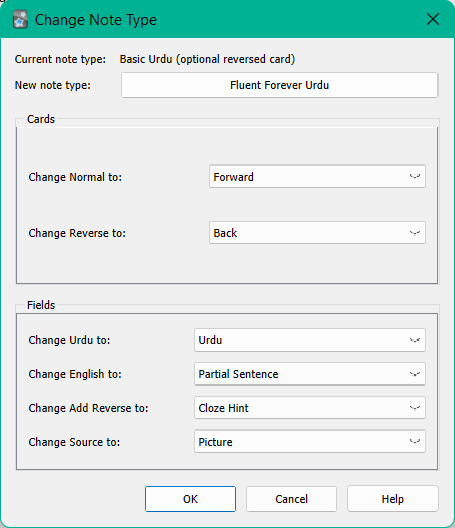 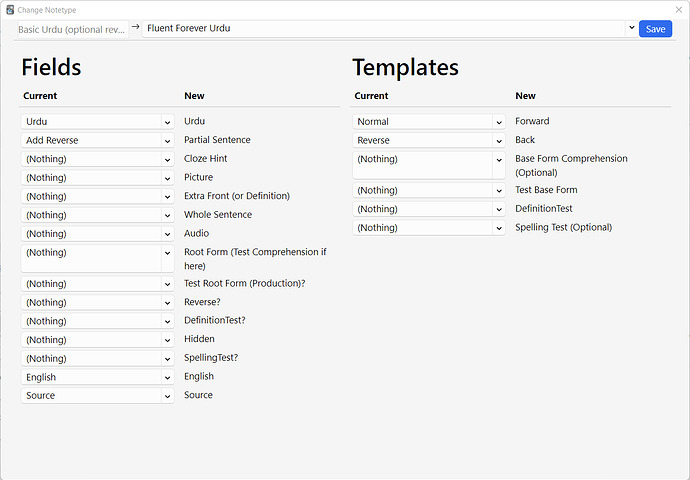 On the one hand, there is now some great new functionality which matches old note type field names to new note type field names. I also saw that it gives you a nice warning if you are about the leave a populated field behind unmapped, I don’t think that feature was there before the new UI (correct me if I am wrong). So that’s awesome, kudos!

OK, that post makes me feel better, I didn’t find it before and I see I almost said the same things as you. Looks like it is a little bit of a work in progress ( I hope).It does look like some of the issues mentioned in that thread have been fixed, so maybe this post will be become the new that post.

For me, the labels Current/New of the columns seem to be correct?

I think the title “Templates” should be changed to “Cards” though.

For me, the labels Current/New of the columns seem to be correct?

The other part about Templates/Cards I noticed the difference, but I don’t seem to have ever needed to use that part of the interface for some reason, so I have no thoughts on that.

with the new UI, I no longer see at a glance that I have only 4 tasks to complete

The example you’ve picked favors the former screen. If you were changing the notetypes in the opposite direction (fluent->basic), the results would be reversed: the new screen would show only 4 fields, and the old screen would show lots of them.

The dropdowns are provided on the current notetype now so that an existing field can be mapped to multiple new fields, which makes it easier for users to duplicate fields and then later modify them. They’re on the left because it seemed more logical to have the old notetype on the left, but we could switch them so that it goes new ← old with the dropdowns on the right if people think that is more logical.

The existing notetype at the top is small so that maximum space is available for the new type, which is important on small screens. The rationale there being that the user probably knows what notetype the cards they selected are. On large screens it is unnecessarily small, and I’d be happy to accept a change that made it larger when width is less constrained.

The switch from the old to the new window confused me, too. But the new screen made sense once I understood that it adds the possibility to duplicate fields.

They’re on the left because it seemed more logical to have the old notetype on the left, but we could switch them so that it goes new ← old with the dropdowns on the right if people think that is more logical.

Input on the left and output on the right seems more intuitive to me. And the change itself might confuse users:

I understand the new design better now, as well as the need to sometimes copy to multiple fields, which wasn’t possible before.

Separately, I definitely appreciate the matching of old to new field names as well, and the orphaned fields warning, I don’t think either of those were there before, and I was already in the process of semi-standardizing my field names across note types when I discovered this.