Keyboard Shortcut for Indent not working 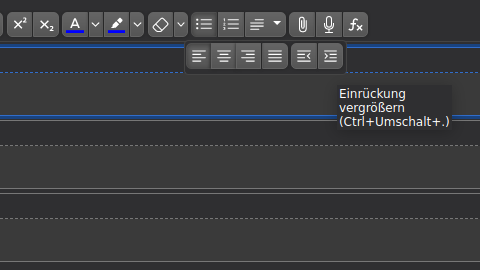 Maybe something to do with your keyboard layout? It works for me on a Linux system with the Anki interface language set to German.

I also can’t use the keyboard shortcuts. I tried with .55 qt6 beta2 without any add-ons. Maybe I miss something but it doesn’t work for me in win10 (german keyboard, anki in german) and it even does not work with an english keyboard layout and the anki language set to English in linux-debian11-kde.

@kleinerpirat : you have a german keyboard layout I assume. Do I (we) make something obvious wrong here?

I’ve also had issues with various editor shortcuts in the past. I think for indent/unindent the suggested one doesn’t work on my machine either, but some other key did the trick (Ctrl+<) maybe?).

I’ll take a look at this once I’m home.

@Rumo how do you fare with Anki shortcuts on a german keyboard?

This one is almost working:

But if I unindent, the cursor is not at the list item any longer…

The shortcut keys do not work with the Japanese keyboard layout either. Taking a quick look at ts/editor, it seems that the indent and outdent shortcut keys are only working when the icons for the block level formatting commands are popping up. You can confirm the behavior with the following code:

(I don’t know how to properly fix it.)

I switched to a US keyboard recently (my pinkies love it) and meant to try this on my second machine. But I guess @hkr has figured it out already.

Thanks @hkr! I’ve pushed a fix.