Anyone have add-on ideas?

I’m not quite sure a password would help you.

For one, people could just export the flashcards from their Anki once they have imported them using the password. This way, they’d get a shareable file without any password.

Love this initiative. Thanks!

Idea #1: Enhanced Timebox
I’d like to see the timebox feature enhanced a bit. Right now it just says how many cards were seen during the timebox. That is nice. But I think it could be enhanced like in the image below.

If someone answers a certain number of cards or achieves a certain percentage of accuracy, then the timebox popup might also give some type of congratulation message. The levels needed could be set in the config.

Idea #2: Updating some of the graph addons to work with the current Stats screen
There are some great graphs and stats page addons that would be great to have working on the new/current design for the Stats window. Here are some examples:

Idea #3: Anything that gamifies study
A number of addons have worked on gamification, and have been creative, but many of them then stagnate in their development. A robust effort to help increase the gamification side of Anki could be nice and help expand the user base.

Idea: Better Sibling Handling
Anki 1 used to offer more robust handling of siblings. In Anki 2, a sibling is just buried until the next day. This works for reviews with small intervals, but for people who have been studying for years, and have mature decks and deeply mature cards, spacing a sibling card apart by a single day is barely helpful.

For example, if one sibling card has a 1.5 year interval and another has a 2.5 year interval, but they both come due on the same day, then spacing them apart by one day has little value. In such a situation, it would be better to space them apart by a week or two at least.

In Anki 1, as far as I recall, cards used to be buried based on percentage. So a card could be buried for up to 10% of its interval in order to create space between sibling reviews. I think there was also a minimum interval. (It’s been a long time, so details are hard to recall). Nevertheless, the point was that sibling burying was more robust. This was eliminated for a few reasons, including that if someone has lots of cards generating per note, then sometimes a card might keep burying while the siblings were shown. But I personally think that this would only affect a very small percentage of users, and that the majority of users could benefit from better sibling handling. That said, I think Damien has mentioned that it is not an easy fix, and I’m not sure if an addon could handle it all, but it would be great if it could! Wish you all the best!

Hi,
Under the notion of password was implied the notion of flashcards protection against downloading them to the desktop or sharing them with others.
Furthermore, it is very easy to share a password but it is also very easy to change it so it’s not really a problem.
This kind of shared but protected data exist for example in Google drive.

I have now found that I can change the fields that are displayed in browse, so I can display the fields I would like to edit and we just need a means by which we can edit in the table rather than having to use the edit dialog 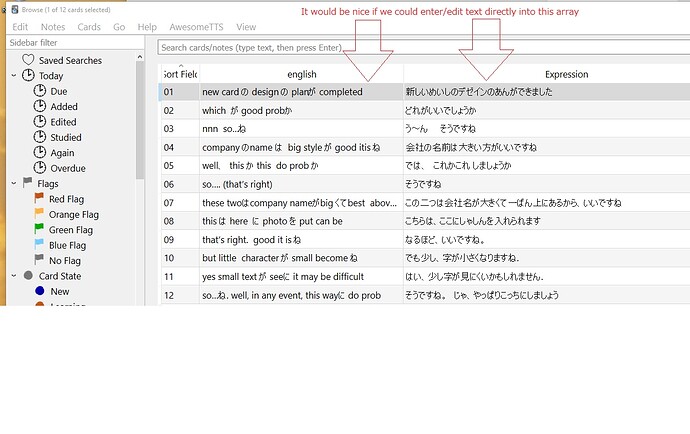 Not sure I understood your suggestion fully, but I think you want to emulate Anki Desktop on mobile?

I think this is a bit ambitious for an add-on (some poor person would have to support it for years).
Down the road, the mobile clients will share an increasing amount of UI elements with Anki Desktop, so it is not unlikely that there will be cross-platform add-ons in the future.

Clozes already have their own class: .cloze
So it’s really easy to style them to your liking with the template editor

Edit: Ah you mean the ones that are not active. True, those are currently not accessible via the DOM. Take a look at the Closet add-on for that.

there is no need to emulation

Any update on if/when an update to Popup Dictionary will be released? Thanks!

Glutanimate told me next week for sure

Please share a link to your AnkiHub project.
Are you using github?
You will find many developers who are eager to help you build this.

@Maitreya it is on GitHub, but is not public at the moment. We are planning to make this as cheap as possible and hopefully will have a freemium model so that it is available to all. The reason for needing to charge is because it has a been a massive project (1.5 yrs in the works, over $25k invested and will likely need at least one full time software engineer to manage and update it since anki is always changing).

More details to come, but here is the website and email list for more information as we have it: AnkiHub - Coming soon

A. I would love to add a date above each answer button that will tell when will be the next study of this card.
B. I would also love the option of printing directly to a printer with options such as cards by days or decks of cards.
C. Add option to select font and font size during editing.
D. For Windows tablet option to mark text as in Android.
E. Update to rememorize_btn extension
thanks

Sometimes I have music in the background while doing the cards, and it’s kinda tricky to choose the proper volumes if Anki can’t change its own,

We have been working very hard to create new add-ons. We’ve already come out with a few public add-ons and have others in the works. Many ideas also had add-ons already existing and we’ve noted that on our sheet.

I wanted to share this publicly so that you can all see where we currently stand: Notion – The all-in-one workspace for your notes, tasks, wikis, and databases. (comments are enabled on this link if you have suggestions)

This is all being funded by your generous donations and income brought in through our Mastery Course or Memberships/Patreon. We hope these projects have been useful to you all! Special thank you to @BlueGreenMagick and @FloatingOrange who have been primarily working on these projects

A. I would love to add a date above each answer button that will tell when will be the next study of this card.

Our exam notifier add-on may be helpful? Not quite the same thing… AnKing Member-Exclusive Add-ons

Hi, I don’t know it should be an addon or implemented directly on anki, but Advanced Conditional Replacement, instead of having a field empty or not, it relies on values like interval, ease, reviews, lapses un such for exemple:

Every 1.5 month, I bulk generate content on that field for every cards with an interval above 1.5 month but we could directly have it with that idea with field like:

What are your thoughts?

Group cards: reveal each cover one by one instead of all together.